Last night I went to a B.o.B. headlined concert featuring Wale, J. Cole, and Playboy Tre.  I got there after Playboy Tre’s time, so I can’t comment on his performance, but I’ll try my hand at reviewing the rest of the show. 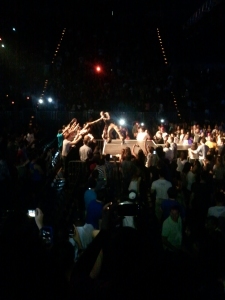 Being a(n early) fan of J. Cole, I’m pleased to say he was absolutely killing it.  I’d say that most people did not know who he was before the concert – but they do now.  He rocked the house and impressed everyone.  Performances included “Lights Out,” “Who Dat,” “Higher,” “In the Morning,” and “Blow Up.”  I’m pretty sure his set was longer than everyone else’s, plus he had stage time during both Wale and B.o.B.’s sets too.  His energy was great, and the crowd was really feeling it.  My favorite song is “Blow Up,” but I think “Higher” was J. Cole’s best performance as far as crowd enthusiasm goes.  For “Higher,” the whole building had their hands up and were singing along to the chorus. 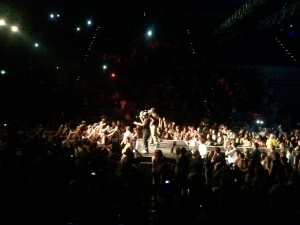 Wale kept the good vibrations going during his set.  He definitely showed off his awesome rapping abilities, with the music often being cutoff so you could hear his sick flow.  What I think made Wale the crowd favorite was that he actually went into the crowd and performed.  For almost half of his set he was roaming the crowd from left to right from floor seats to bleachers.  This drove the crowd nuts.  My favorite song was “Nike Boots” but the most popular was definitely “No Hands.”  For me this is unfortunate because I am not a fan of radio hip hop.  I wish more people knew about his album and mixtapes.  Very few recognized songs from Attention Deficit like “90210.”  Wale’s set was shorter than J. Cole’s, but still very good.

B.o.B. was the headliner, but I think he disappointed.  His set was incredibly short.  I’m not sure if it’s because J. Cole went way over, or it was planned that way or what, but I was hoping for more.  Ignoring the short set, his performance was… difficult to describe.  His energy was good, and his flow was sick as always, but he just wasn’t able to engage the crowd the way J. Cole and Wale were.   My favorite, “Beast Mode” was incredible though.  The song is so Marshawn Lynch that I was happy to see it live.  My group was feeling it, but I’m not sure how much the rest of the crowd was.  Again, I think it’s because most only know radio songs.  “Nothin’ On You” was a crowd pleaser and so was “Airplanes.”  “Bet I,” “Past My Shades,” and “Don’t Let Me Fall” were great, but like I said, the crowd was kind of lackluster, taking away from the performance. Also, J. Cole performed “Pass Me By” during B.o.B.’s set. While I enjoyed it, I think it confused the crowd a little, and probably should have been done during J. Cole’s set instead.

Overall, the show was awesome.  I definitely wish more people knew about these guys before going, as I think that would have made for a more engaged crowd.  Regardless, I still had a good time, and so did everyone in my group. Wale made an interesting point: “JCole, Wale and B.O.B together in this f***ing building, we really appreciate this s**t.  This is the first time you got 3 of the top 10 rappers in the same f***ing building, so make some f***ing noise!”